Thoughtback, get your thoughts back. 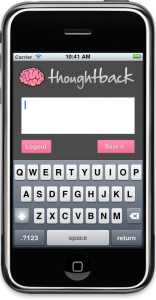 The result of my weekend? Thoughtback.

Thoughtback is a personal idea saving/reminding service. Basically, we built an app around the idea that lots of people try to keep track of their thoughts and ideas, but very few ever get to revisit them. So what thoughtback will do is take your thoughts, then at some later time, send you an email with one of those thoughts so you can revisit the idea.

The service is a webapp, iPhone app, and Mac OSX app. How did we do it in just one weekend?

We had a pretty skilled team of developers. A few people on the team built the website, and I built the iPhone and Mac apps.

The website backend was written in PHP using CodeIgniter. The email stuff is done using Python and Cron. That stuff is sorta outside my realm of expertise so I’m glad I got on a team with people that knew what they were doing.

I wrote the iPhone and Mac apps. At first, it might seem like an awful lot to get done in 48 hours, but I was able to do a pretty good job of sharing code between the two apps. For example, all the network communication is done using a cross platform class. Luckily NSURLConnection was one of the things that Apple decided to keep on both platforms. For Keychain access I used a class I found that was actually designed to be used just for iPhone. Unfortunately (although fortunate in my case) the iPhone simulator doesn’t use the iPhone keychain, it bizarrely uses the Mac keychain. So I was able to use some code (SFHFKeychainUtils written by Buzz Anderson) and slightly modify it so it would work on both the iPhone and Mac. Basically I just changed the ifdef from the iPhone simulator to my mac. This let me basically just switch out my view classes and I was good to go.

Anyway, it was an AWESOME weekend and we’re gonna keep working on it. We even won $1000 bucks to put back into the “company” so hopefully we can get some cool stuff into it. We’ve even been getting some press on local radio stations and in the newspaper. The Mac app is available for download RIGHT NOW and the iPhone app is ready to be submitted to the app store. Check it out www.thoughtback.com.

This entry was posted in Uncategorized and tagged code, objc, php, swlansing, thoughtback. Bookmark the permalink.

One Response to Thoughtback, get your thoughts back.