I built Waypoint to solve a problem I was having with picking my girlfriend up after class. I would get to the building where she was supposed to be and then wait for her to show up. Sometimes, if she hadn’t shut down her computer or saved her work, it could take quite a long time.

What Waypoint does is broadcast your location for a predetermined amount of time. So when I would go to pick up my girlfriend, I would tell it to broadcast for 20 minutes. Then I would text her a URL where she could view where I was on a Google map. That way, she would know how close I was and could start getting ready to leave when I was close, not just when I arrived.

The predetermined amount of time is really what makes Waypoint nice. Most people don’t want, literally, their every move broadcasted to the world. Sometimes, however, it would be a convenient thing to do. After the amount of time, Waypoint stops tracking you. It doesn’t keep draining your battery and you won’t forget to turn it off. It will even track you in the background so you don’t have to leave the app open all the time.

What else is it good for?

Tailgating – Ever tried to meet someone at a tailgate with 100,000+ other people? It’s almost impossible, especially if they haven’t found a place to set up yet. Someone can send out a waypoint and then everyone will be able to meet up with them.

Bar Crawls – Ever tried to meet up with a group of friends on a bar night? They tell you to go to one bar but by the time you get their, they’ve moved on. With Waypoint, you’ll be able to meet them at the second bar.

Running a race – Wanna show off at your next 5K? Send out a Waypoint right before you start the race and people can check out your progress even if they aren’t there.

Where are you!? - Never get another one of those phone calls. Just send out a Waypoint when you’re on your way and not only will people know when you’re arriving, if something goes wrong, they’ll know where you are. 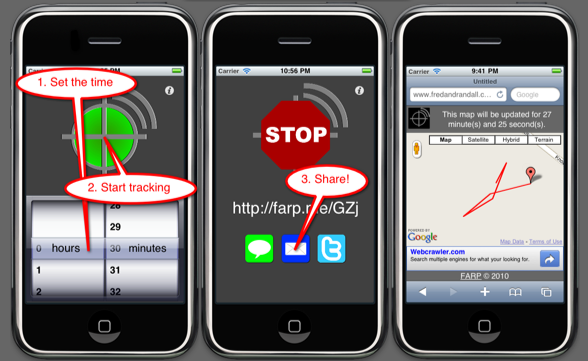 One Response to Waypoint