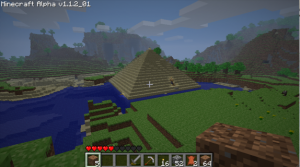 Recently I’ve been dabbling in the wondrous world of Minecraft. If you haven’t heard of it, it is the awesome game created by Markus “Notch” Persson. Its really incredible what this one guy did in a pretty short amount of time. The game is fun and incredibly deep and complicated. I have also read that he makes something like 300,000 dollars a day off of it.

Anyway, what is cool about Minecraft is that you can build up your own virtual world. What stinks is, building that world takes a long time. I’ve been playing the game at home a lot but also play it at work during lunch sometimes. Starting off a new world wasn’t a prospect I was looking forward to. So what did I do? I set up my games to sync my world with Dropbox. This lets me build up my awesome pyramid at home as well as at work.

I was going to write up a tutorial on how I did it but I found this great writeup on the Minecraft Wiki about how to do it.

This entry was posted in Uncategorized and tagged Dropbox, Minecraft. Bookmark the permalink.